The media were impressed with Liverpool’s maturity in the 1-0 victory at Brighton and praised the Reds for bouncing back to winning ways.

It wasn’t pretty but it was job perfectly done, with another crucial three points rebuilding a seven-point gap over Man City.

Liverpool were not at their blitzing best, but Klopp will be delighted with another display of maturity and composure which brought the mini-blip to an end.

Here’s how the media assessed a narrow win at the Amex Stadium.

The Independent’s Jack Pitt-Brooke labelled it a “classic title-chasing victory” and thinks it could prove to be one of those decisive results in where the title ends up:

This was a classic title-chasing victory: away from home, narrow, nervy, never in total control, and reliant on a dollop of contingency to get them over the line.

If Liverpool do win it then this will be singled out as one of the hinge moments.

ESPN’s Glenn Price praised Klopp for getting an instant response after frustrating defeats:

Liverpool have never suffered back-to-back league defeats under Klopp, who knows how to get a response from his players.

The Liverpool Echo’s Connor Dunn rightly assessed that Klopp’s decision to heavily rotate against Wolves was justified by this win:

Klopp rested a host of players for their contest with Wolves and as we well know it resulted in Liverpool being eliminated in the third round of the FA Cup.

However, as the Anfield faithful well know by now – when the German boss makes a call it is usually the right one and today the words ‘In Klopp We Trust’ could not be more suited.

Writing for Goal.com, Mark Doyle thought the victory gave Man City a reminder that catching this Liverpool team will be no easy task:

Then again, this win at Brighton served as a most timely reminder for City that catching this resilient and dogged Liverpool side won’t be easy either. 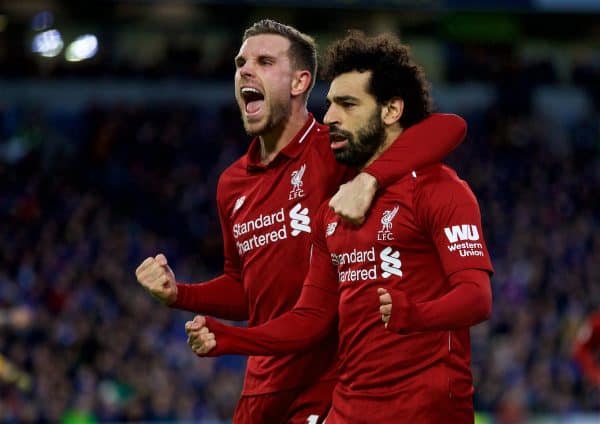 The Guardian’s Paul Doyle was impressed with how Liverpool dealt with the pressure of the occasion:

Liverpool did not sparkle here but, more importantly, nor did they wobble.

What about their ability to cope with the pressure of a title race when their closest rivals have undoubted pedigree? Their response was positive.

TIA’s own Jack Lusby was impressed by how the Reds retained patience to grind out the win, noting particularly how Klopp’s side now ooze confidence in these situations:

As with that victory at Vicarage Road, Liverpool showcased their 2018/19 vintage at the Amex as they remained patient and ultimately secured a result that put them, temporarily at least, seven points clear at the top.

Unlike the Reds of previous seasons, this is an increasingly composed, confident outfit when in these situations, and the credit goes to Klopp and his players for having the patience to grind out win after win.

The Evening Standard’s David Lynch thought the Reds proved they have “mastered the dark arts” needed to see out games, which will be key in the title race ahead:

But there was no shortage of gamesmanship in the final moments of this slim victory over Brighton, as the Reds hung on under sustained pressure. Every opportunity to waste time was gleefully taken, and every slight contact was turned into a free-kick for the visitors that kept an equaliser out of the hosts’ reach.

This maturity could be a vital new string to Liverpool’s bow if they are to go on and lift the league title this season.

The Liverpool Echo’s James Pearce thought the manner of such a controlled win illustrated that Liverpool’s title charge is built on solid foundations this time:

Unlike Liverpool’s last title challenge five years ago, this pursuit of the big prize is built on strong foundations.

The Reds have the ability to blow opponents away but, crucially, they can also grind out results when not at their sparkling best.

Price led the plaudits, labelling the Brazilian as “superb” alongside Virgil van Dijk and lauding his work in rising to the physical battle against Glenn Murray:

Superb again in the heart of defence for the second game running. He made a crucial block to deny Pascal Gross in the second half.

Lusby thought the Brazilian showed that he can now be viewed as a reliable stand-in option for emergencies:

It’s unlikely he’ll be retained for the visit of Crystal Palace next weekend, and he’s much better used in midfield, but the No. 3 is certainly a serviceable fifth choice.

Meanwhile, our own Henry Jackson was also in awe of Virgil van Dijk’s performance and believes the Dutchman “holds the key to Liverpool winning the title”:

Fresh off the back of being named the Premier League Player of the Month for December, Van Dijk was once again immaculate, as he strengthened his cased for PFA Player of the Year award.

The Dutchman is a man mountain and holds the key to Liverpool winning the title this season. Outstanding.

Reporters offered some mixed alternative thoughts from the win

Doyle, of Goal.com, noted how the Reds showed the “useful knack of winning ugly” remains:

Not only did it decide the game in Liverpool’s favour, it underlined that the Reds have retained the very useful knack of winning ugly, encouraging evidence of their newfound mental strength and maturity.

But Pitt-Brooke wasn’t so impressed with the ground out win and believes the Reds still need to improve performance levels as this is a key factor to delivering consistent results:

Performance is still what matters most. And if Liverpool are to maintain their lead at the top of the table then they may have to play better than this.

Because for much of this game they looked pedestrian, and it was only Salah’s ingenuity and Pascal Gross’ clumsiness that let them back in.

On a similar train of thought, Price felt one negative from the afternoon came from Liverpool ‘losing their way’ for a period due to a lack of creativity:

Liverpool did lose their way at one point in this game, which is why Salah’s goal was so important.

With frustration seeping in during the first half, Liverpool resorted to pumping balls into the box. They were comfortably dealt with by Lewis Dunk and Shane Duffy and Liverpool went back to square one.

Meanwhile, Lusby discussed a key tactical shift in the second-half that proved crucial to earning the victory – that being the extra freedom afforded to Salah:

Salah, Sadio Mane and Xherdan Shaqiri made frequent diagonal runs behind the defence while the likes of Fabinho, Van Dijk and Henderson attempted long balls over the top—more often than not finding the head of a Brighton defender.

After the break, however, this approach changed, with Salah given more freedom to drop deep, drift wide and drive at the Seagulls’ defence, and this proved decisive as he won and converted the penalty on 50 minutes.

Lynch felt Liverpool’s challenge in trying to overhaul Man City was laid bare by the limited squad at Klopp’s disposal in the win:

The size of Klopp’s task in overcoming Manchester City in this year’s title race was perhaps underlined by his matchday squad for this fixture.

Of course, Klopp’s men will play fewer fixtures than City in the coming months after being knocked out of the League and FA Cup this season. But that seems like something of a fair deal considering the wealth of options Pep Guardiola has at his disposal.